Fueling the journey to energy democracy 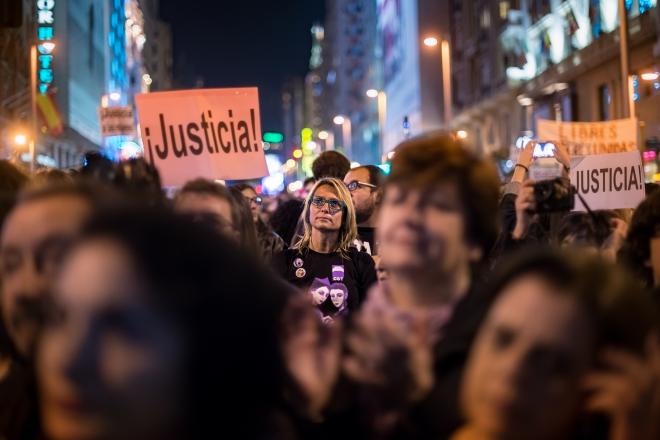 Almost 200 women gathered in Bilbao, Basque Country from February 2-7, 2018. Their mission was to set a process in motion – a narrative demonstrating the need for the energy transition to be ecofeminist: “Eco,” because the alternative energy model needs to be life-sustaining, protecting our collective survival, and “feminist,” because the model disproportionately impacts the lives of women everywhere. A new model that acknowledges and diversifies the roles a multitude of women play in their day-to-day realities and in the global political economy.

The feminist strike on March 8, 2018 saw one in five women take to the streets throughout Spain. Hundreds of women signed a petition in support of the strike, a manifesto calling for an end to the current capitalist, heteropatriarchal energy model.

“We strike for a new renewable energy model, distributed, decentralized, democratic, participatory, decarbonized, equitable, fair and in the hands of people. A new ecofeminist energy model in which energy is a right and life is at the center.”

These convergences show that feminists are strategising to build a new energy model, because energy is currently produced and consumed based on sexist, racist and classist power relations that favour the pursuit of private profits. Groups that are already treated with disdain by many societies are further marginalised, in specific and concrete ways, by the current energy model.

“The current energy model reflects the social model”, says Alba del Campo, journalist, ecofeminist and coordinator of Cadiz’ two energy round tables. Both models are based on the inherent exploitation of the majority of women in society, through a sexual division of labour that allows for unpaid reproductive work. As long as this systemic injustice goes unchecked, a real energy transition will be out of reach. 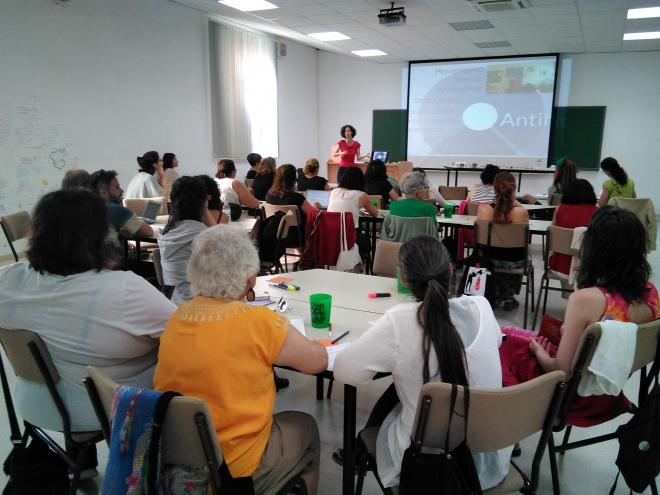 Today’s political economy still expects – or even requires – women to take on a multiplicity of caring and household roles. Without this unpaid and mostly invisible labour, the political economy could not function. Public services that supply (warm) water, electricity and heating are essential to fulfill these roles. If these essential services were publicly owned and fundamentally democratic they would include women and be grounded in their daily realities – potentially offering a road to equitable redistribution of power and resources.

How are women rendered invisible? Research by Enginyeria Sense Fronteres (ESF) shows how official data on poverty is not disaggregated by gender. Where data is disaggregated, it shows only a 0.1 percent difference between men and women, but this data is based on the incorrect assumption that household income and tasks are evenly distributed, masking realities in which women “suffer from unequal participation in the labour market, an excessive burden of care and household work, and a view of society where heteropatriarchal tendencies continue to dominate.” Data that takes into account individual income shows a very different reality, with 25.7 percent of men and fully 49.7 percent of women at risk of experiencing energy poverty.

ESF researcher Irene Gonzalez Pijuan found that 70 percent of energy aid recipients in Barcelona are women. Single-parent families are at a higher risk of experiencing energy poverty; 80 percent of these parents are women. In turn, lacking access to a sufficient amount of energy has a negative effect on the development of children. Pijuan concludes that inequality between genders increases the likelihood of a family suffering energy poverty. Furthermore, too often analyses of energy poverty and inequality treat women as a homogenous group, ignoring how materially vulnerable groups of women, such as single mothers, women over 65, migrant women, and domestic and service sector workers, are in specific material ways more heavily impacted by the structural injustices of the current energy model.

Extractivist oligopolies and corporatised politics have imposed humiliating austerity measures, privatisations of public services, and excessive and growing socio-economic inequality, displacement and dispossession, and environmental destruction. These processes drive skyrocketing levels of energy poverty and a worsening ecological crisis. The most exploited and discriminated people are hit the hardest: from women in low-income households, women of colour and women with disabilities, to transwomen, single mothers and undocumented women.

Not surprisingly, most governments, corporate boards and international institutions that determine societies’ energy policies are dominated by men. However, as discussed by Laura Roth and Kate Shea Baird in a ROAR magazine article on the potential of municipalism, the growing call for the feminisation of politics – and energy politics for that matter – is about much more than merely increasing the representation of women in decision-making positions. We need to question the ways energy politics are shaped. We need to ask, energy for whom and energy for what? As Alba del Campo puts it, how much and what type of energy do we need and what is it used for?

Understanding for which purposes women tend to use energy, in order to undermine the energy model that is reproducing – if not reinforcing – patriarchy as the basis for capitalism, is necessary to prioritise the needs and labour that sustain us, says TNI’s Lyda Fernanda Forero.

We need energy democracies and participatory politics in which a variety of ordinary women can influence tomorrow’s energy policies. Collective but diversified bottom-up power can ensure a new energy model is run by and services those who the current model exploits and discriminates against. But how do we get there?

Only if we address the sexual division that underpins the economic system will it be possible to fundamentally challenge how energy is generated for a growth-driven production and consumption model. Only if we also fight for a sufficient and renewably-sourced provision of energy, that prioritizes care and subsistence, will it be possible to fully accomplish access to energy as a universal right. Only when we ensure that women’s diverse roles are reflected in new public ownership models, through deeply democratic and participatory decision-making processes, will we have effective shields against reprivatisation of public services. Only if the workers and unions’ fight for a just energy transition (with regards to paid labour) is expanded to value and organise the diversity of women who contribute unpaid, precarious and reproductive labour, will a fair and socially-just economy be possible.

The fight against extractivist oligopolies and corporatised politics has much to gain from understanding how the current energy model is disproportionately affecting those groups that are already more exploited, such as communities and workers on the front line of extractive industries. Without such analyses, a “new” energy model is likely to entrench existing inequalities. In other words, for a just transition towards energy democracy, the new energy laws and policies must reflect the needs and labour of the social and diverse majority of women.

The Alliance against Energy Poverty’s success in passing Law 24/2015 in the Catalan Parliament is an early sign that ecofeminist energy policies are workable. This law is unique in treating access to energy as a human right. An eclectic group of women affected by energy-poverty participated in its drafting, which, since 2015, and for the first time in the history of Spain, prohibits the cutting off of electricity supplies of vulnerable families in Catalonia.

From Bilbao and Cadiz to Catalonia, the fight for a just energy transition is already under way. With courage and endurance we can make it ever stronger and expose the material impacts of the current, profit-driven energy model on the “multiple many” in distinct yet coinciding ways.

This article was heavily inspired by the Summer Course about Ecofeminist Views, Empowerment and Energy Transitions at the University of Cadiz, July 5-7, 2018.